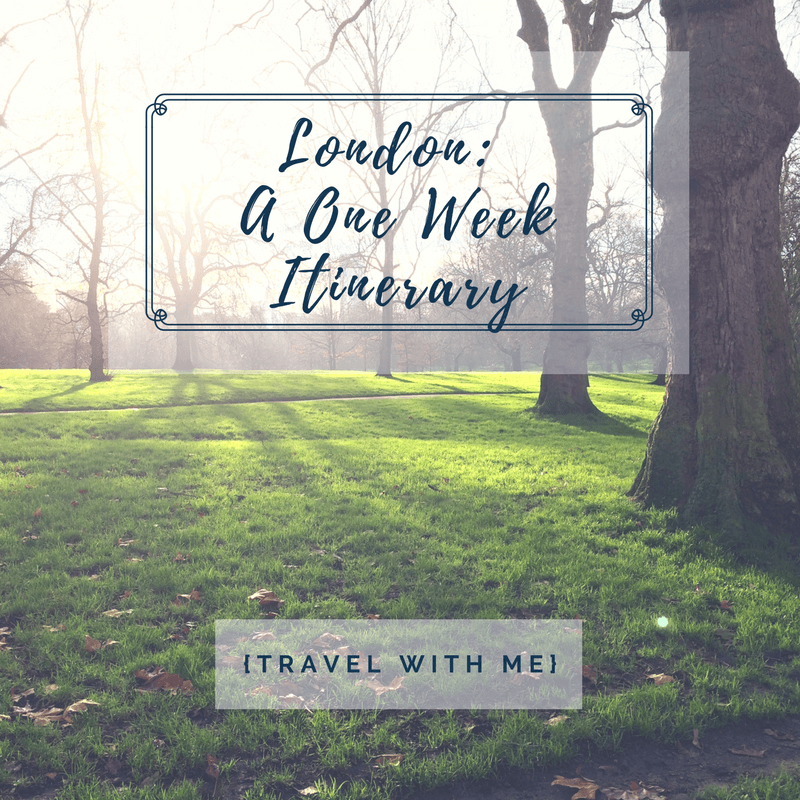 Our first stop on our grand European adventure was a one-week stay in London with my family. The main motivation for this family trip was to see my brother Ben march in the London New Year’s Day Parade with his high school marching band, but we turned it into a a week packed full of amazing experiences. My husband and I have been to London before (click here, here, and here for the details and travel tips!), but we made sure to do many things that we didn’t get the chance to do on our first visit. I’ve underlined anything that I consider a “must-do” below.

On the day of our departure for London, there were major delays from the Dallas-Fort Worth airport due to a large rain storm which came right before the tornadoes and snow storm hit Texas. We were lucky that we arrived in London during the morning as we were scheduled to despite a two hour delay. My family came along after us in another plane, and they were delayed much more than we were. So, instead of waiting in the airport for them as originally planned, we found our way on the Tube to our Homeaway rental for the week. 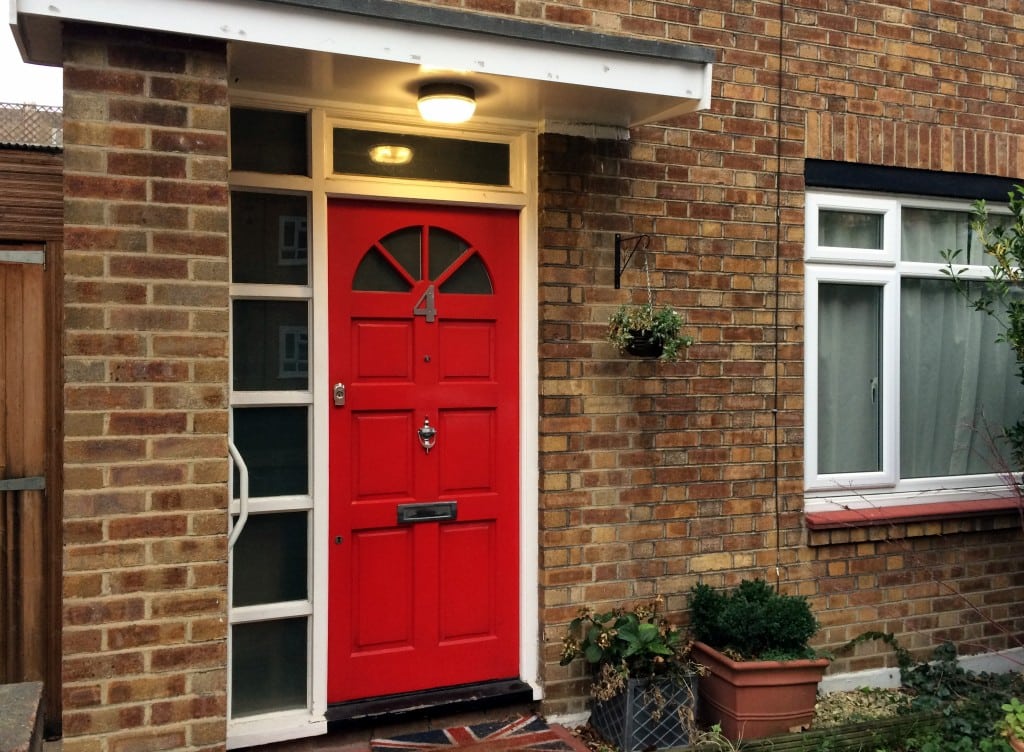 Look at the cute red door of our house rental!

The house was perfect for our group of six. Take a look at the listing here if you’d like to see more pictures or are looking for a rental in London. I was surprised at how quiet the neighborhood was while still being a 10-15 minute bus ride away from most of the major London attractions.

Daniel and I grabbed lunch while waiting for my family. When they arrived, we all bought our 7 day city transportation passes for the week (to use both for transportation and for the excellent 2-for-1 deal you can get at many of the London attractions with these passes). We purchased the passes as Vauxhall Station, one of the few stations with tickets eligible for the 2-for-1. After that, I went with my dad and sister to look around the Westminster area at night. 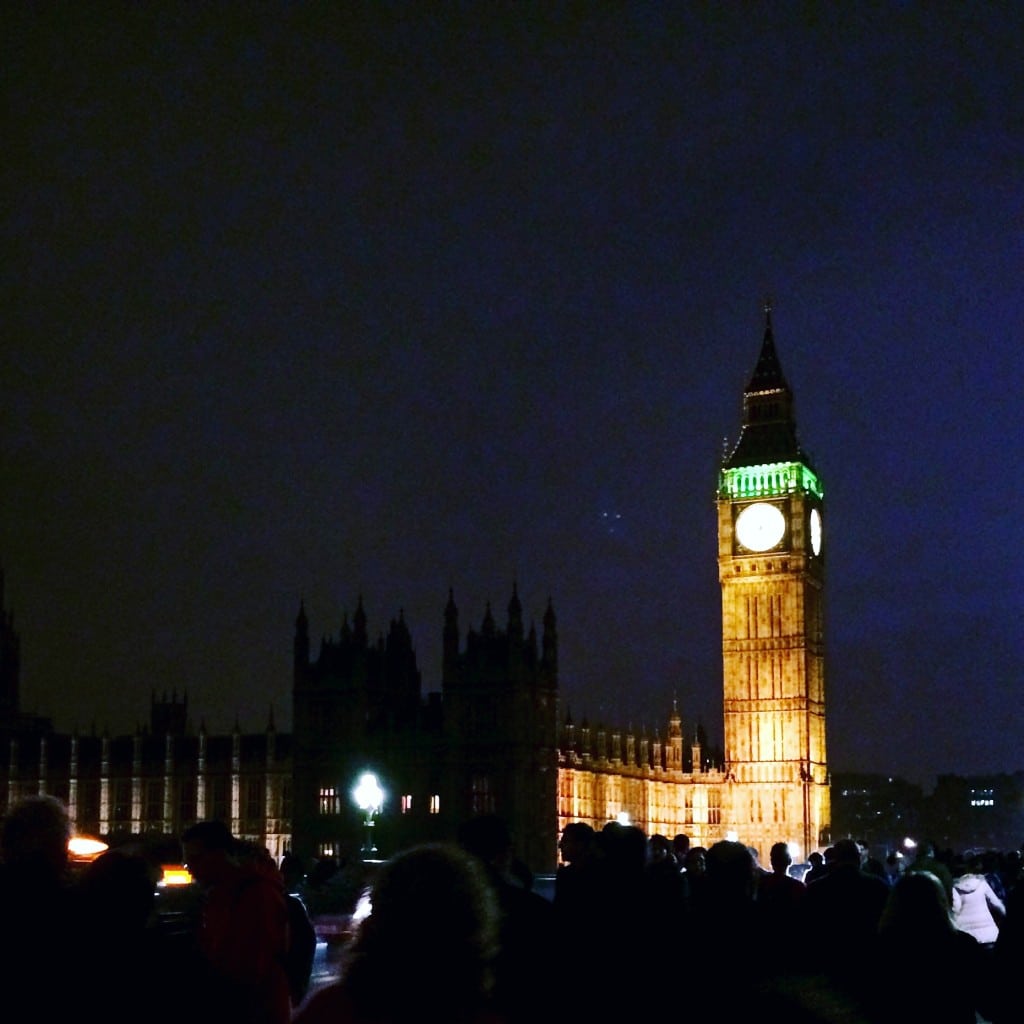 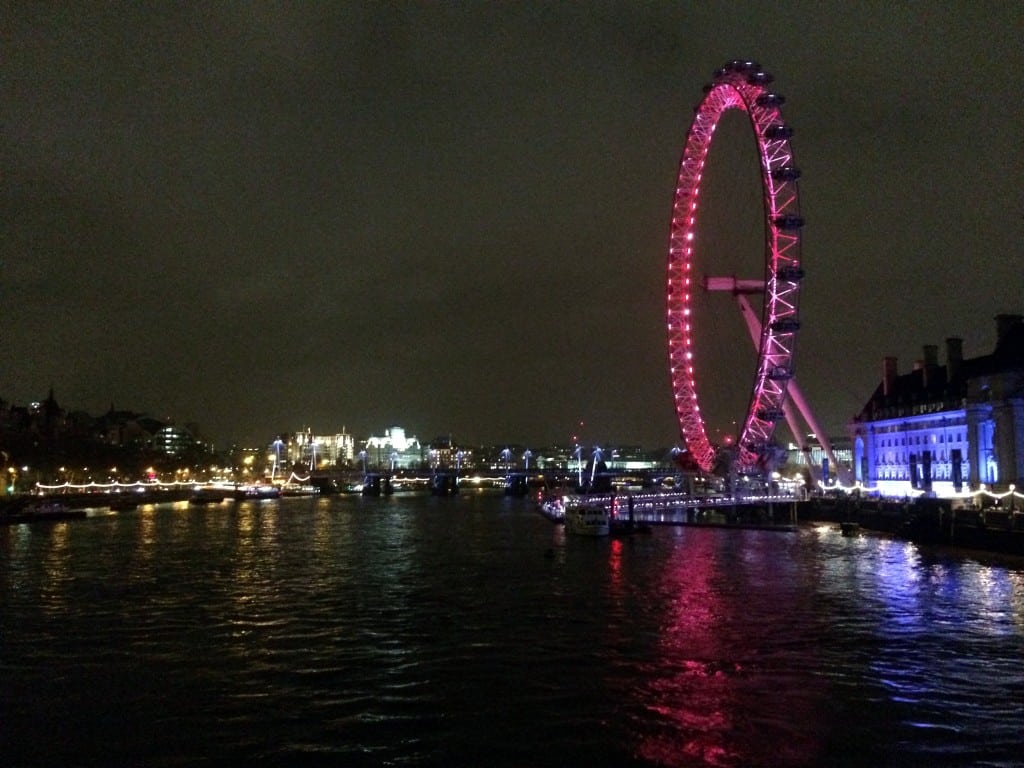 Our second day in London was probably my favorite day. It began with a walk around the gorgeous Hyde Park where we occasionally stopped to take pictures and enjoy the sights together.

Our next stop was a place that we didn’t get to visit last time – Harrods! We were there mostly for the bread and pastries, but we also looked around some of the other floors and rode up the gorgeous Egyptian escalator. 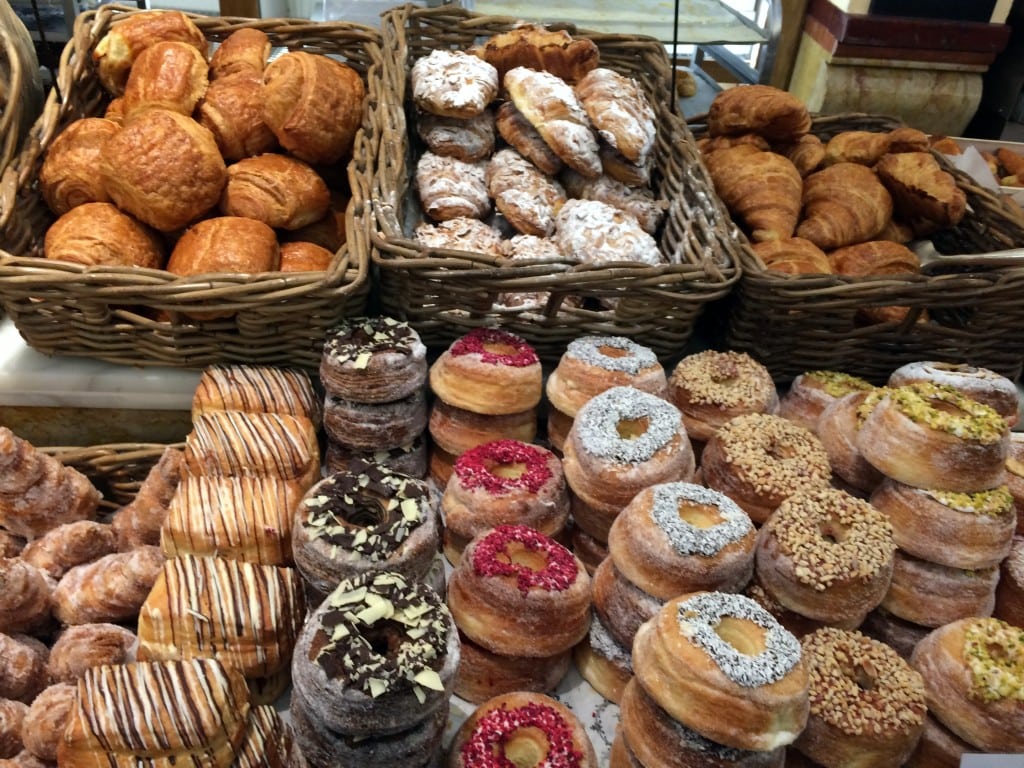 The gorgeous pastry displays at Harrods

We had heard that the apple pie at Harrods was spectacular, so we picked a slice up to share along with our very first cronut. Yum!

Next up on the agenda was another new experience for us – afternoon tea! My sister made us reservations at The Orangery at Kensington Palace, and it was the perfect spot for our first afternoon tea experience. We all loved our tea, but the scones with clotted cream were our favorite! 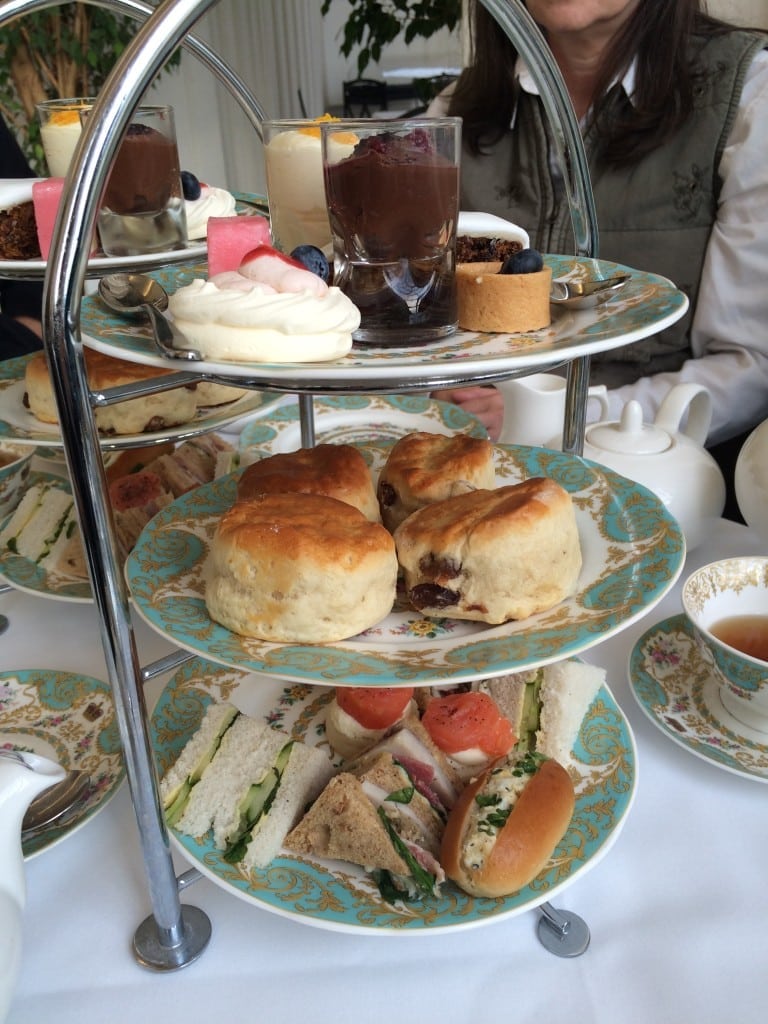 After our tea, we all toured Kensington Palace. It was still decorated for Christmas! 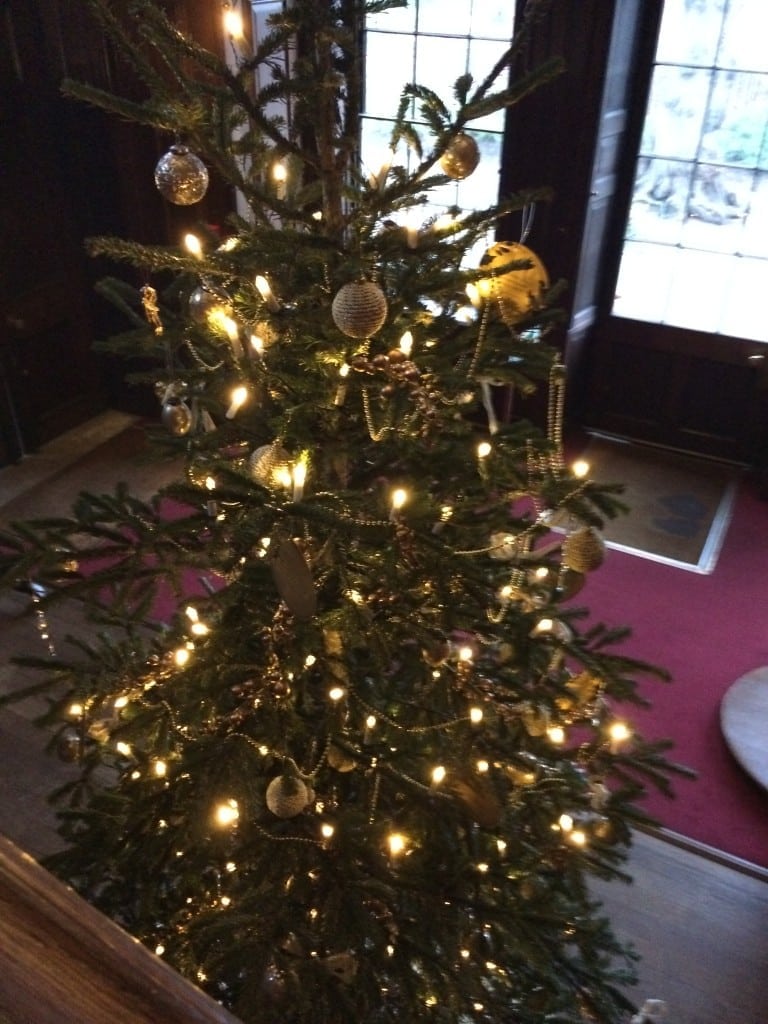 Our day ended with dinner and a show. My whole family went to see Agatha Christie’s The Mousetrap in the West End. This play has been running since 1952, which makes it the longest-running show in the world! We weren’t sure what to expect since people like to joke about this show and how long it has been running, but we ended up loving it! It’s a great mystery and will keep you guessing “whodunnit” to the very end. 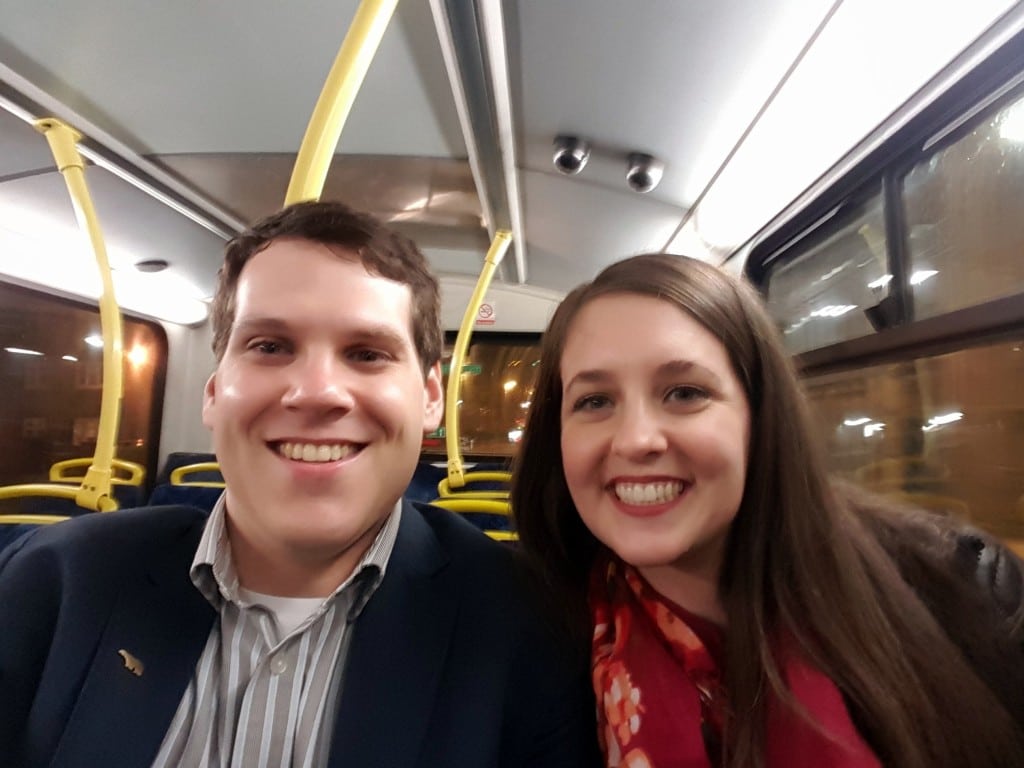 Excited to see the show! 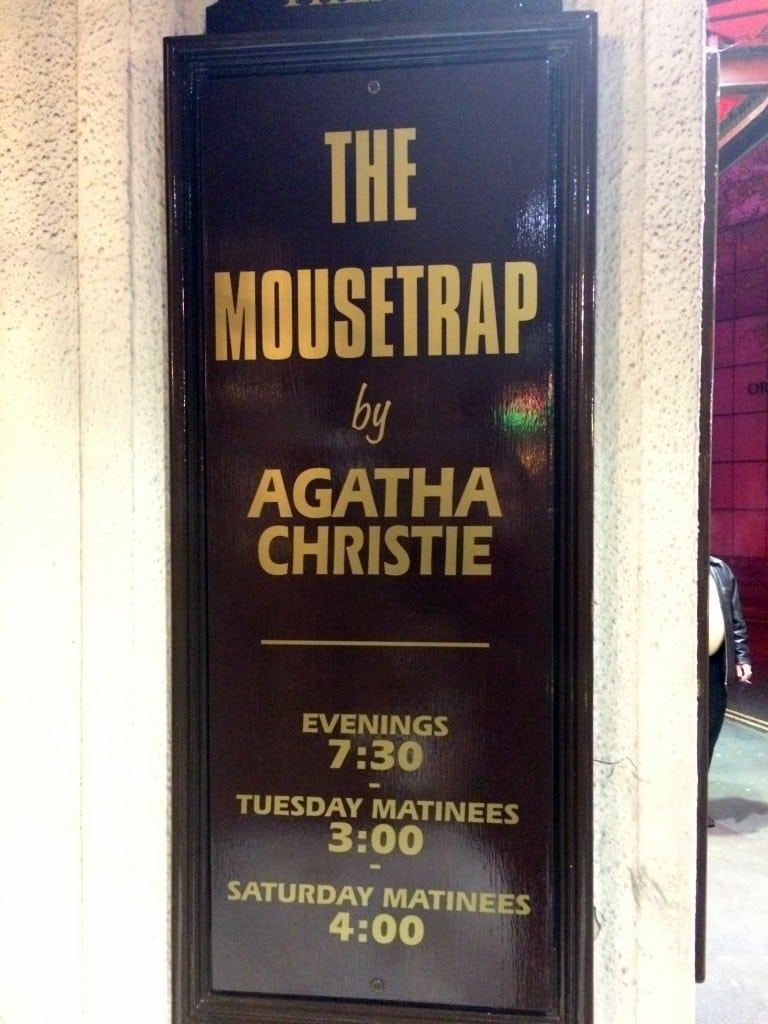 We ate dinner after the show and walked around the Soho area (one of my favorite areas in London).

After a slow morning, the whole family did a private bike tour with Brakeaway Bike Tours! Daniel and I took the Grand Tour of London with this company before, and we loved it, so my family decided to do a tour with the same company. Since we’d done the Grand Tour before, we did the Secret Tour of London this time, and we again had a wonderful time! 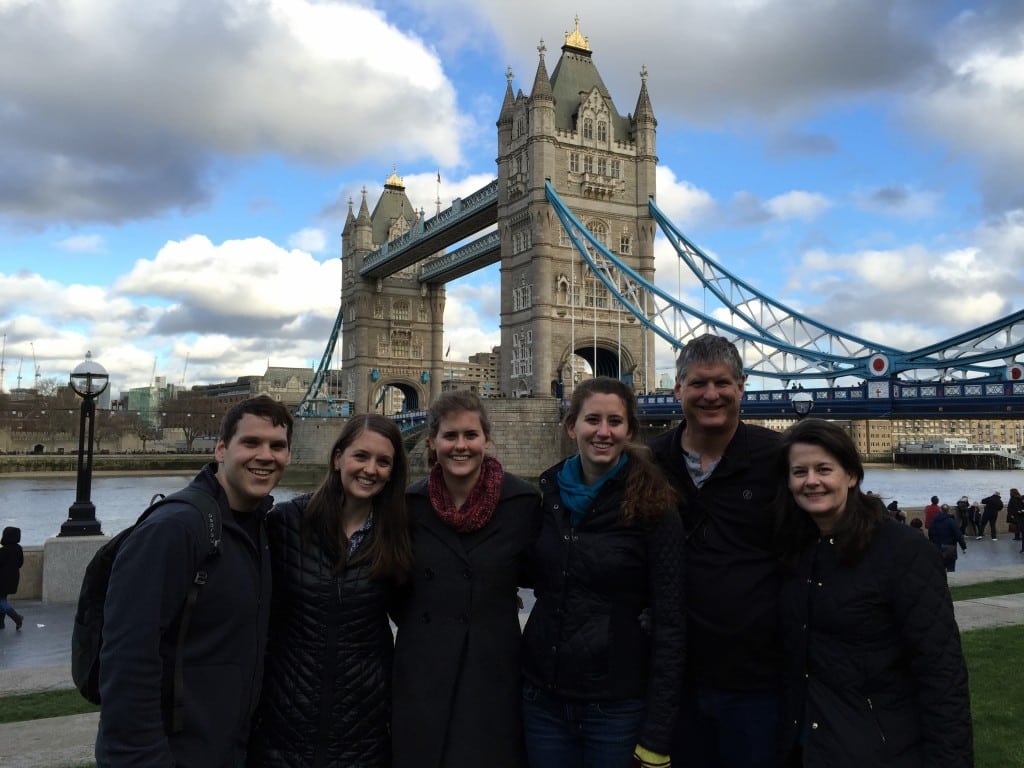 One of the stops on the bike tour was at Harry Potter’s Diagon Alley! 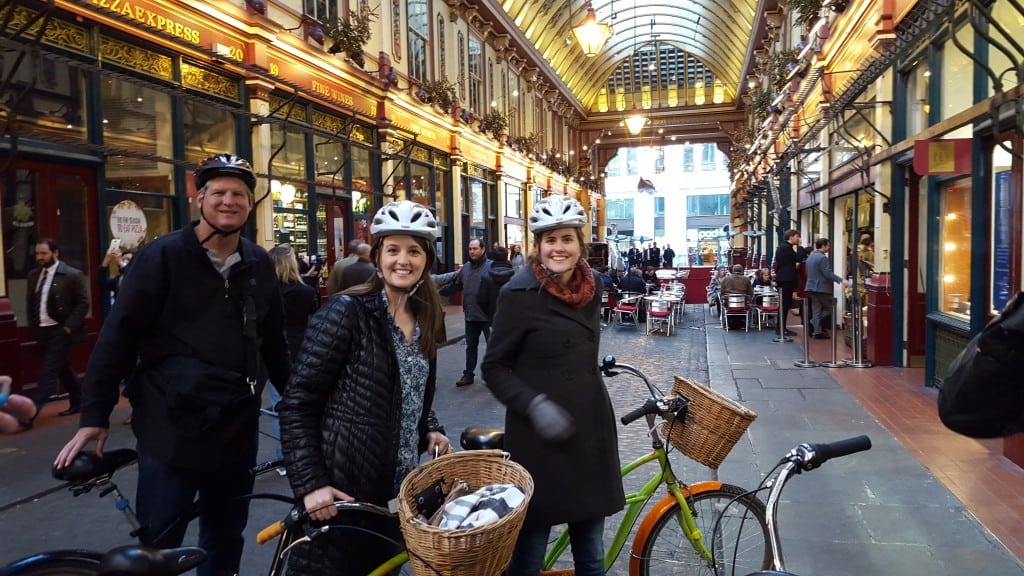 The Gherkin, a cool egg-shaped building that you can see all around London

After our tour, we went to Westminster Abbey to do the audio tour and to attend Evensong. Both were very valuable experiences that I’m so glad we did this trip. Daniel and I have explored a lot of cathedrals and abbeys, but this one is just different. It’s amazing how many very important people are buried there, and I especially loved the section of the Abbey dedicated to renowned authors throughout history. Unfortunately, pictures were not allowed, but in a way, it helped me to enjoy and appreciate the experience even more to keep my camera away.

Later in the evening, we got tickets to go on the London Eye. Believe it or not, Daniel and I decided not to do it last time, but I’m so glad we did it with the family this time around! 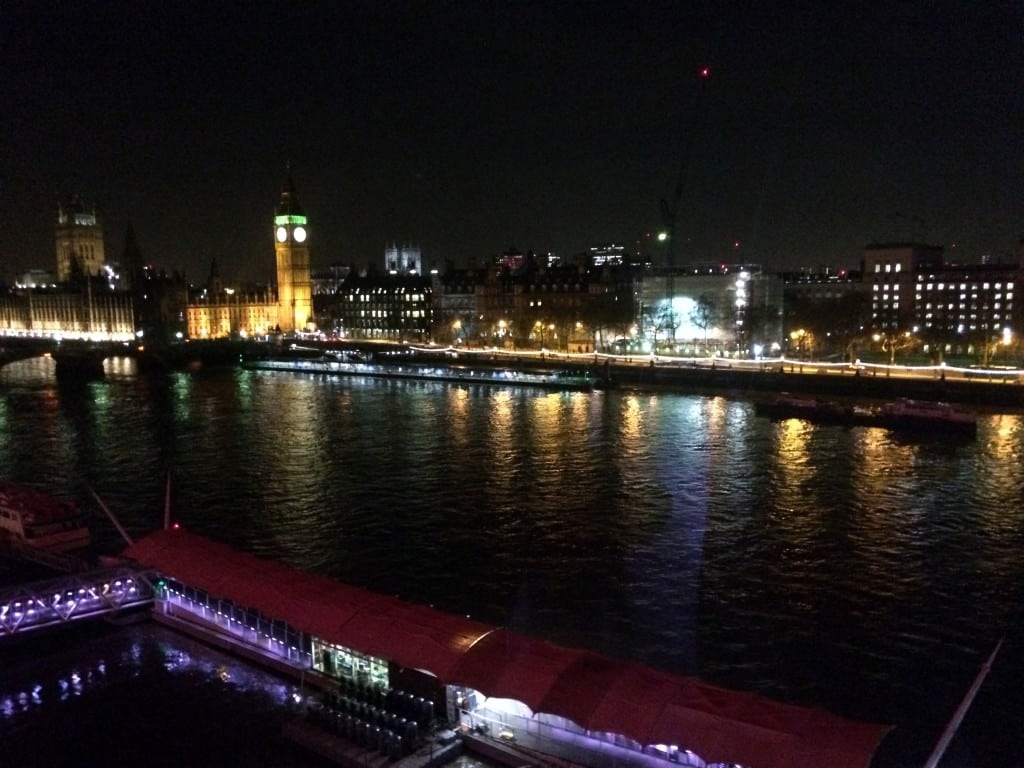 View from the Eye! 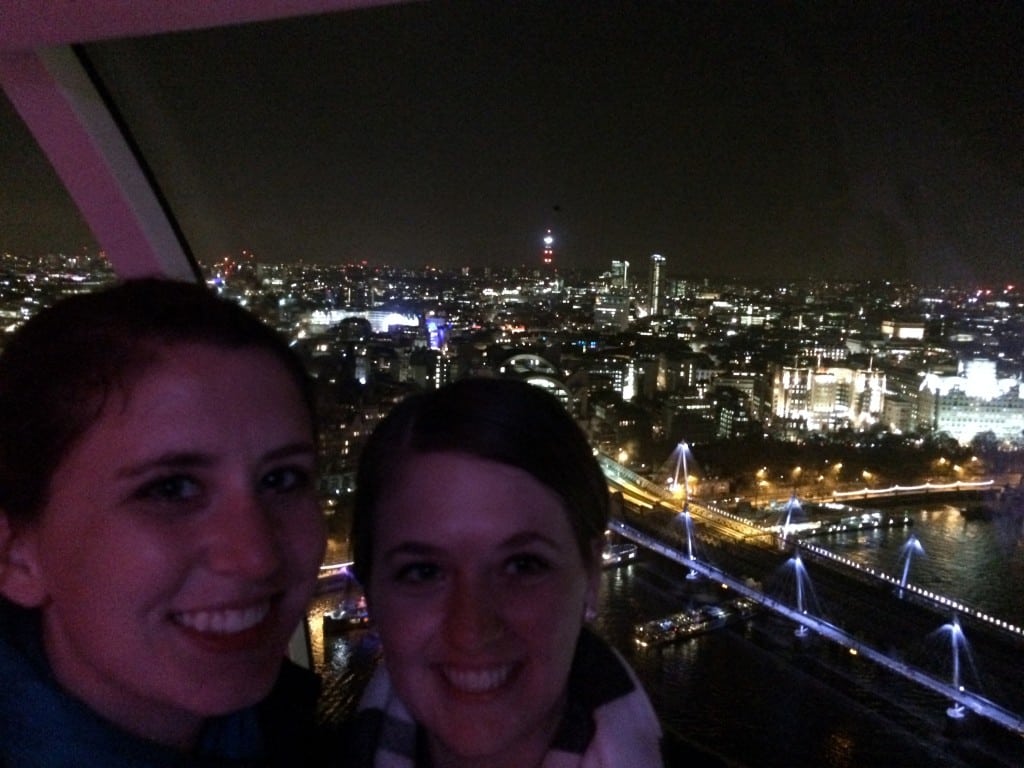 My sister Elizabeth and me on the Eye

We had a bit a of a low-key morning and early afternoon this day. We had lunch with Elizabeth at a local chain called Bill’s. Daniel had some work to do after lunch, so we scouted out a local coffee shop. We ended up finding a place with fantastic coffee (Workshop Coffee), but they didn’t end up having any wi-fi, so we drank our pot of coffee and then headed to Costa for internet access and tea. 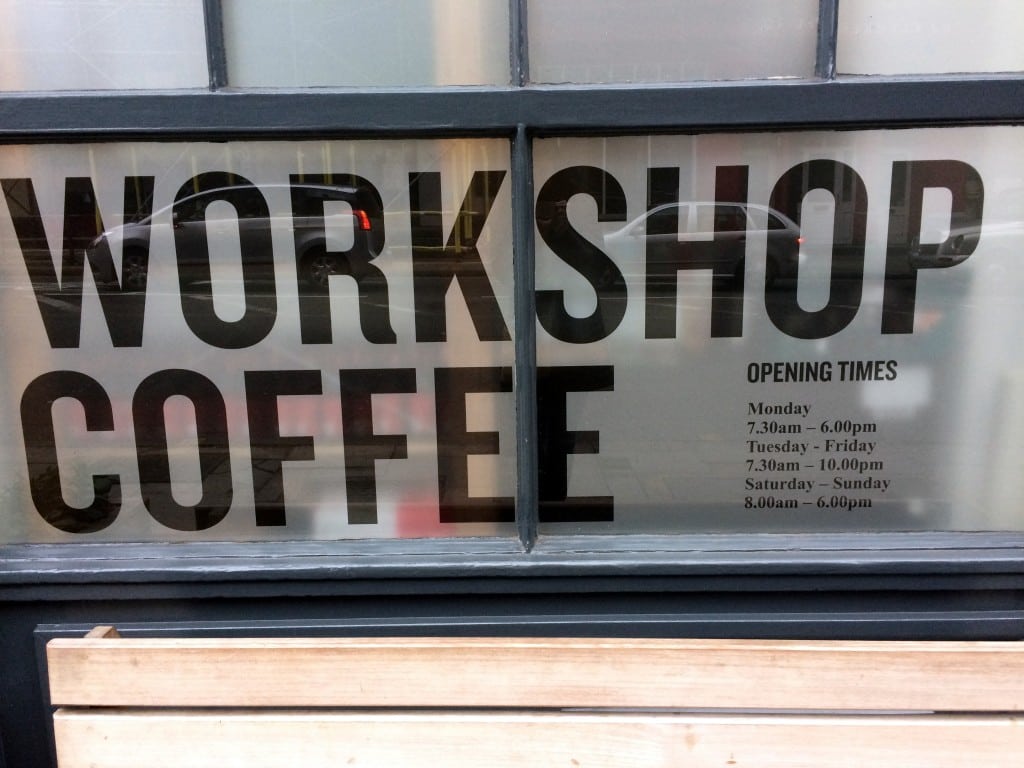 Once Daniel got a little work done, we headed back to the house to change and then left for my brother Ben’s concert! His high school band was invited to march in the London New Year’s Day parade, and as a part of that, they also got to perform at a concert. His band did a fantastic job, and my brother even got to perform a trio at the front of the stage during one of the songs! 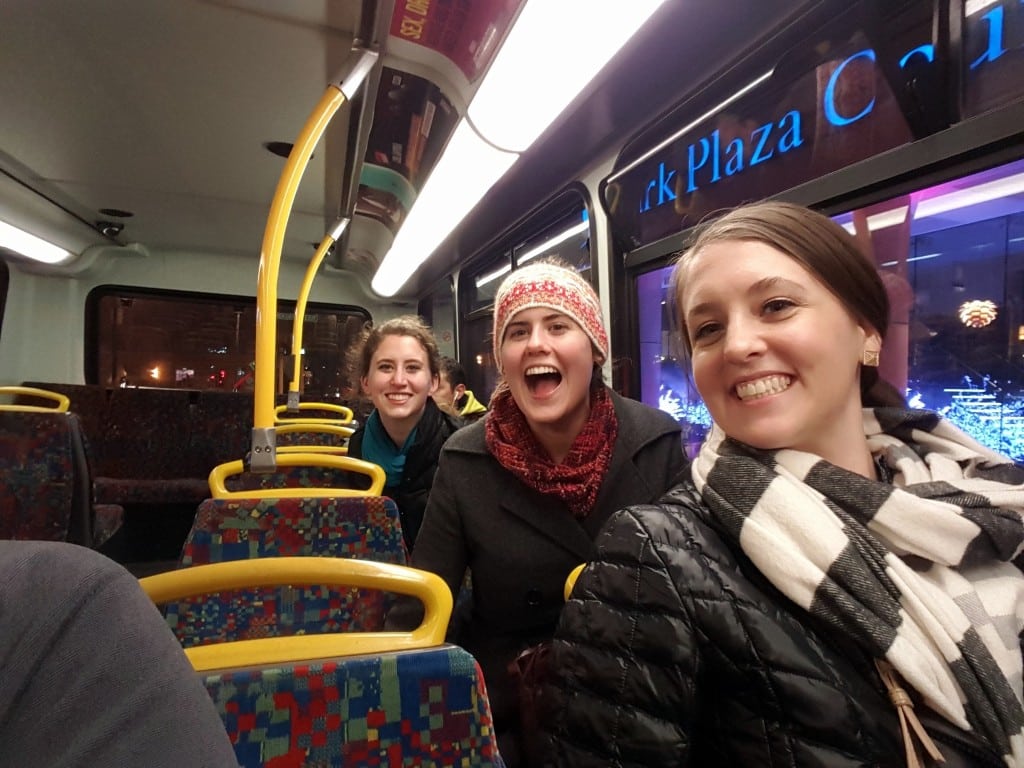 On the way to Ben’s concert! 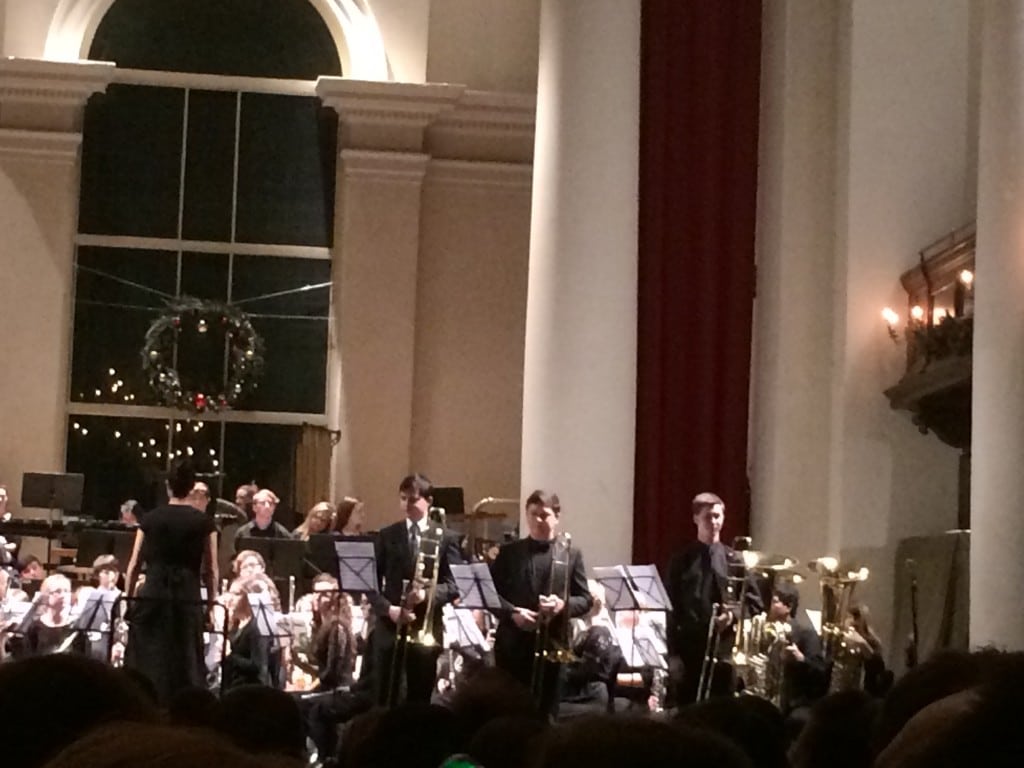 My brother is the first trombone on the left, next to the conductor 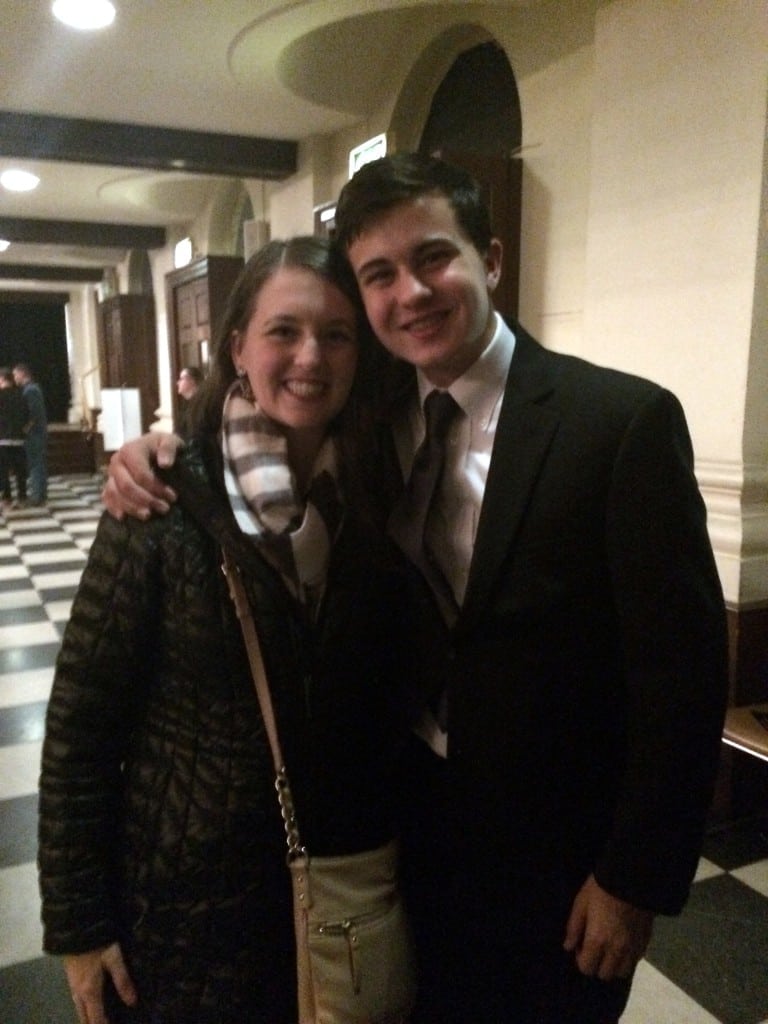 Proud sister after the concert!

To start out New Year’s Eve, my dad, Daniel, Elizabeth, and I went out for a British breakfast, and we found the perfect place for it at The Regency Cafe. It is basically a casual British diner, and the food is excellent. Our favorite part was the booming voice of the man at the counter as he called out everyone’s orders. We very much enjoyed the meal. 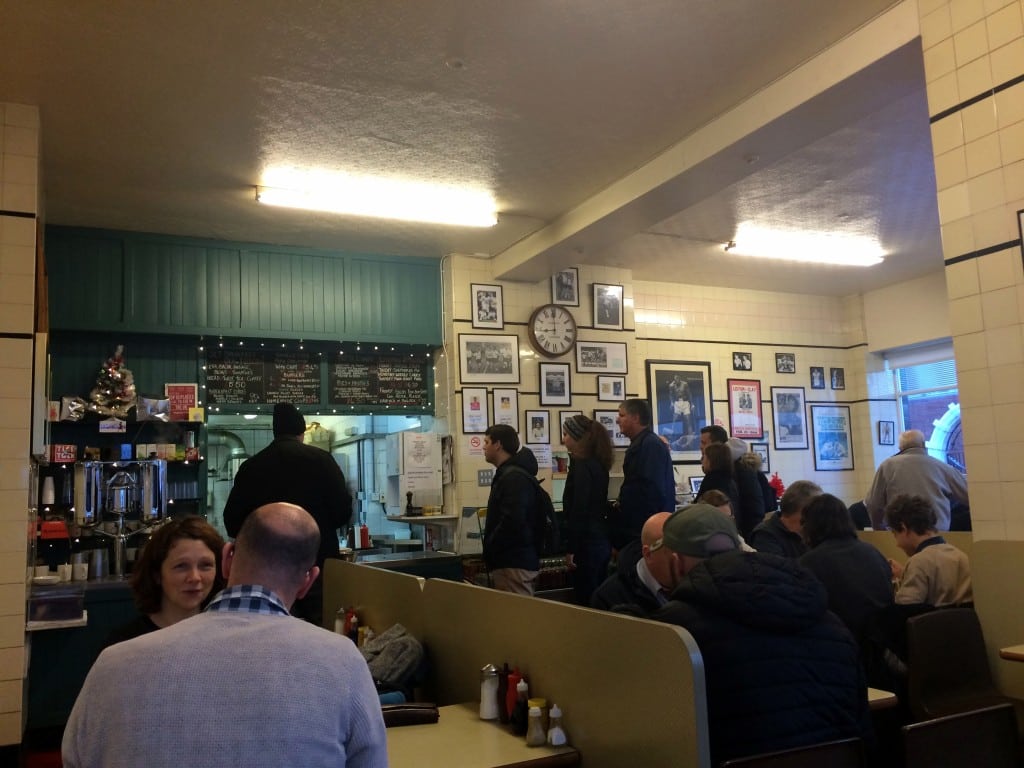 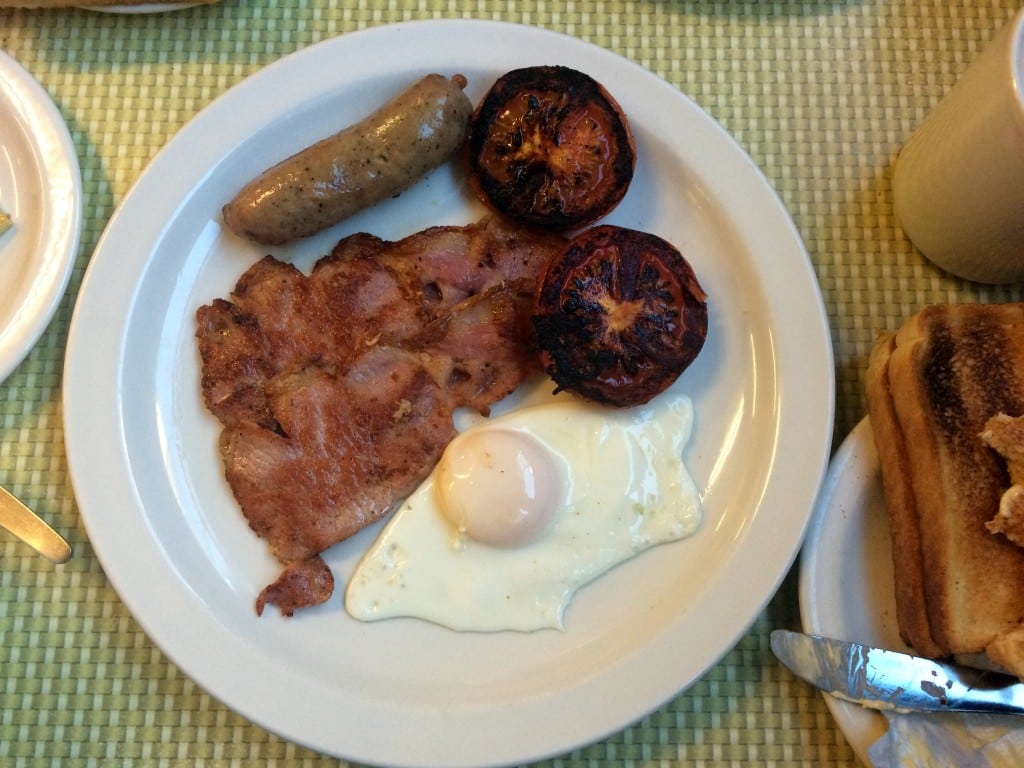 Our next stop was to go watch the changing of the guard at Buckingham Palace. We had seen the beginning of this ceremony on our last visit, but we didn’t stay for the full thing. We were surprised to see how long and interesting the ceremony really was. It’s one of those experiences you want to do once in life, but you probably won’t be interested in going again. 🙂 It was extremely packed and busy, and we were only able to get a close to the front because we arrived about an hour and a half early. 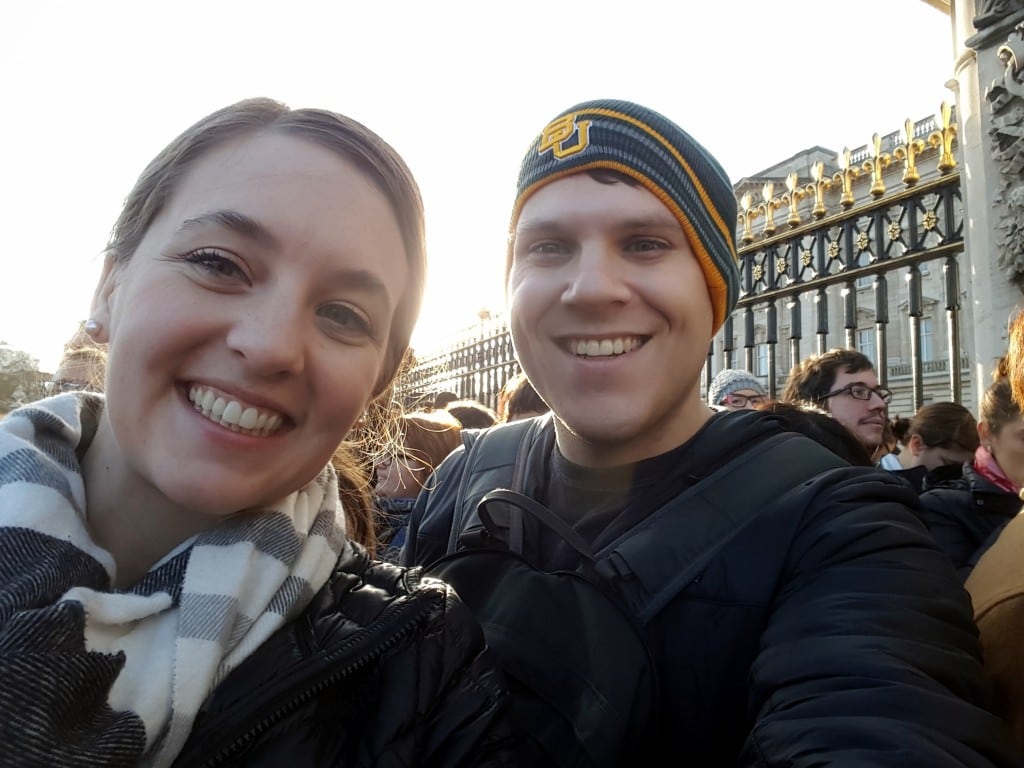 Waiting to watch the changing of the guard!

For our next stop, we went to the British Library. They have a sacred texts exhibit which houses some fascinating works including a Gutenberg Bible, the world’s second-oldest manuscript of the Bible, copies of the Magna Carta from 1215, the earliest intact bound book in all of Europe, and so much more. 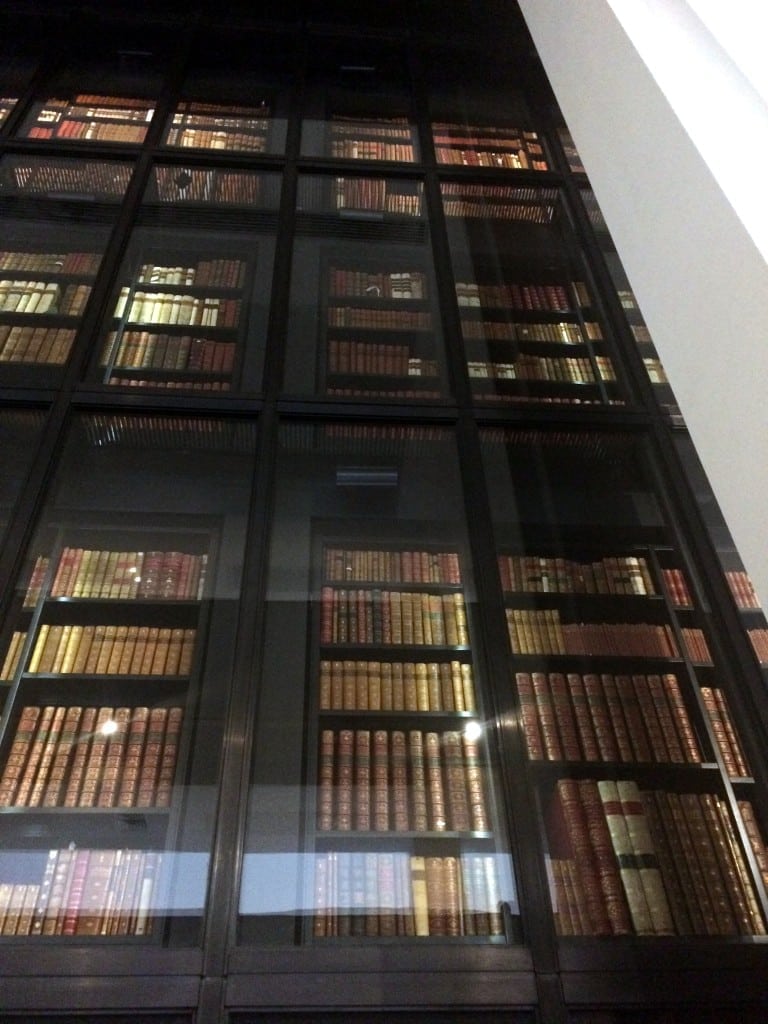 We brought in the New Year with a delicious Portuguese dinner with the family and a movie and games at home.

For New Year’s Day our main event was going to the London New Year’s Day Parade to see my brother lead his high school marching band! It was a fun morning with the family. 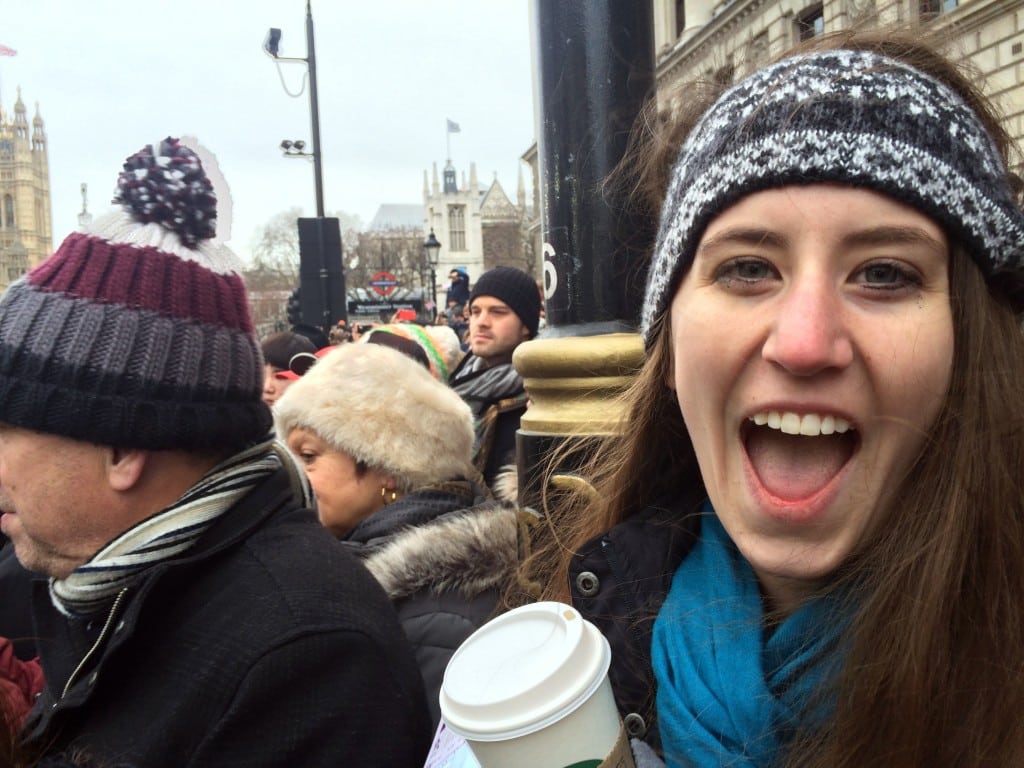 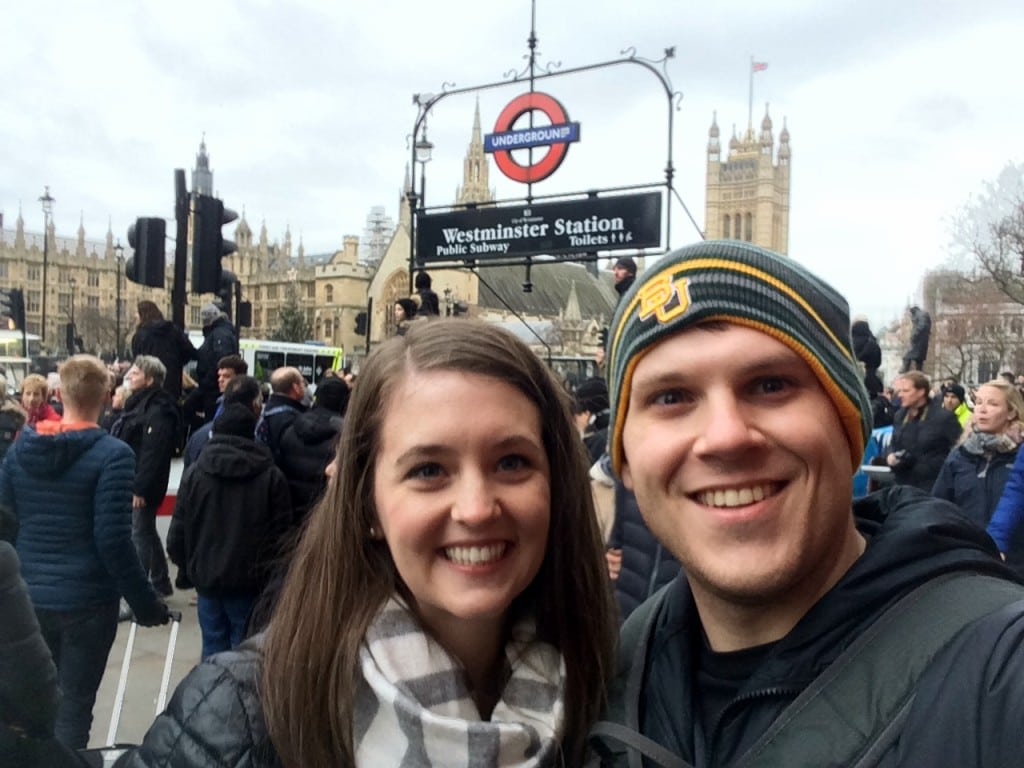 Afterward we had lunch at a cute pub nearby before going to the Churchill War Rooms Exhibit. 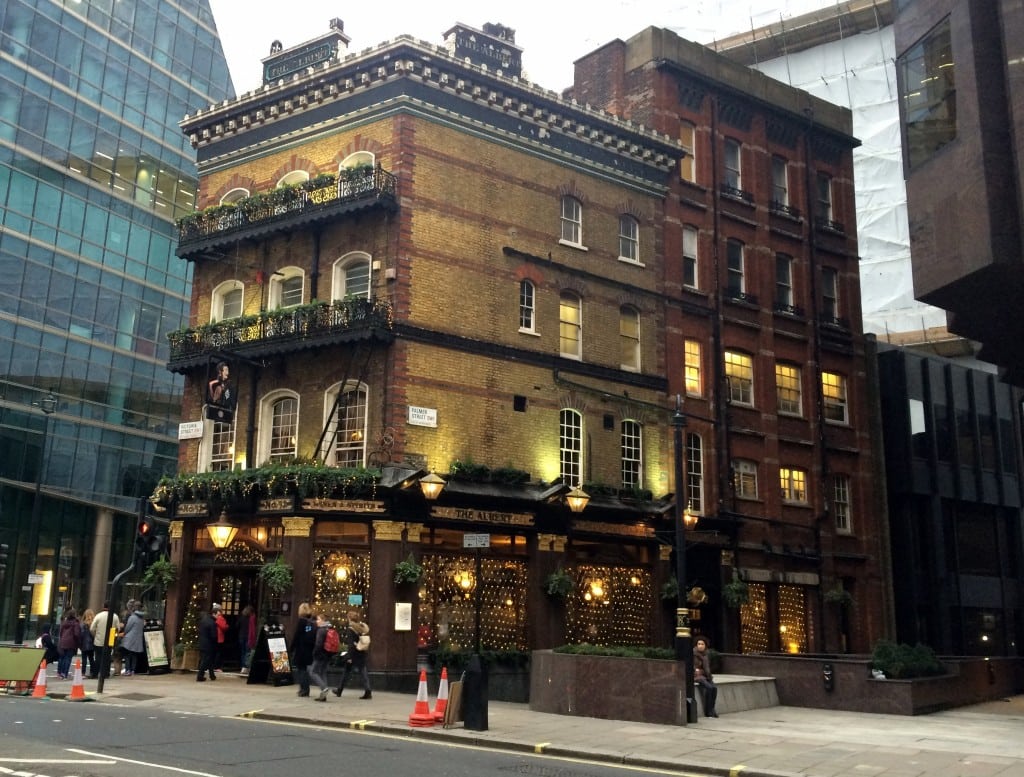 The Churchill War Rooms was one of my favorite museums I’ve ever visited. The museum is built into the actual bunker and war rooms used by Churchill and his crew during the war. The information is presented in a very interesting way. I’ve never been happier to spend a couple hours at a museum before. 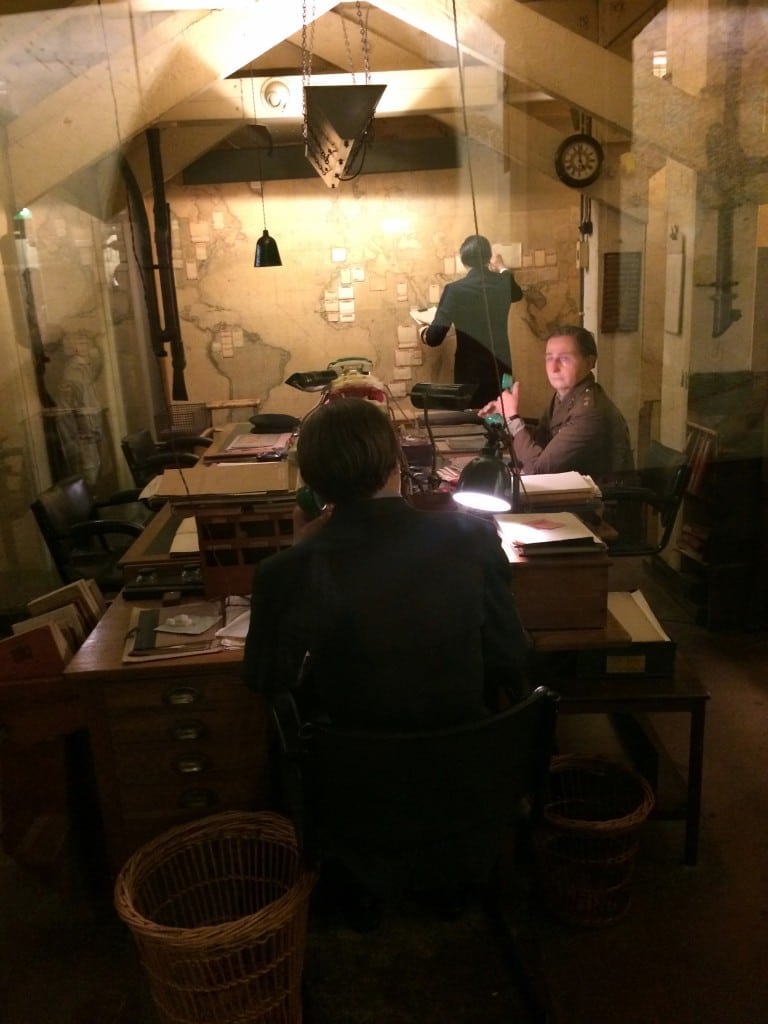 A glimpse into the map room left exactly as it was during its final day of operations in 1945 when everyone left (other than the wax figures of course!)

To end New Year’s Day, we had a wonderful dinner at The George pub with our friends Shannon and Jonathan! It was such a fun surprise to find out that they were in London at the same time as us, so we definitely made sure to see them. By the way, I highly recommend this restaurant for a fun, cozy British pub experience. 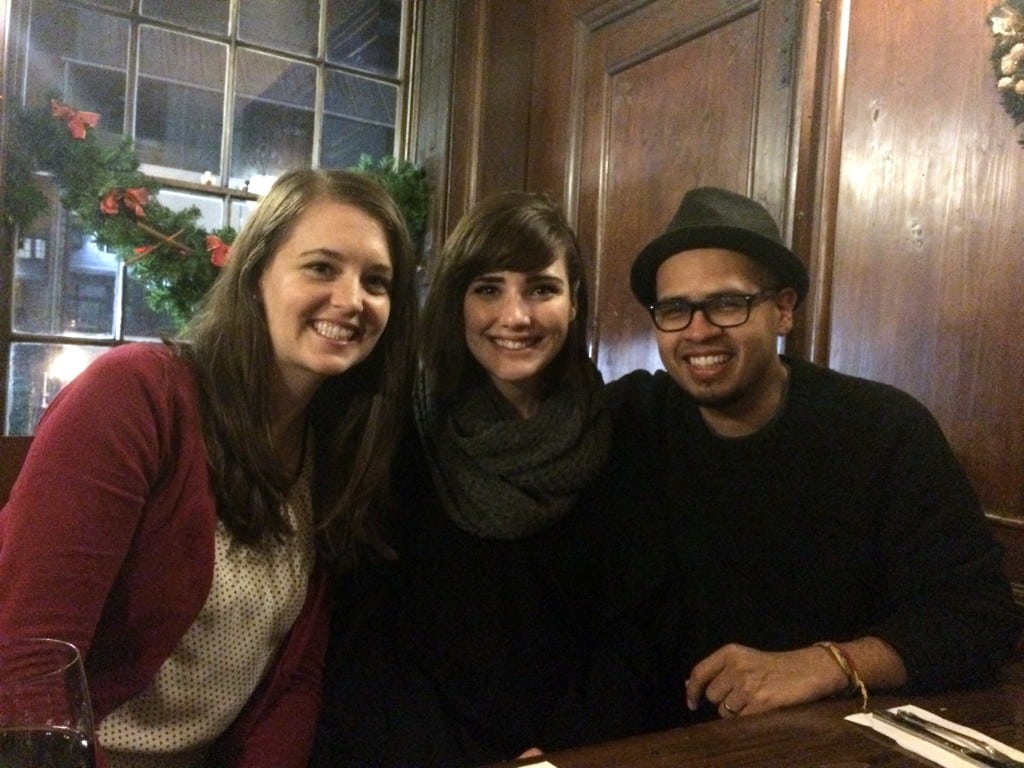 Me, Shannon, and Jonathan at a pub for dinner 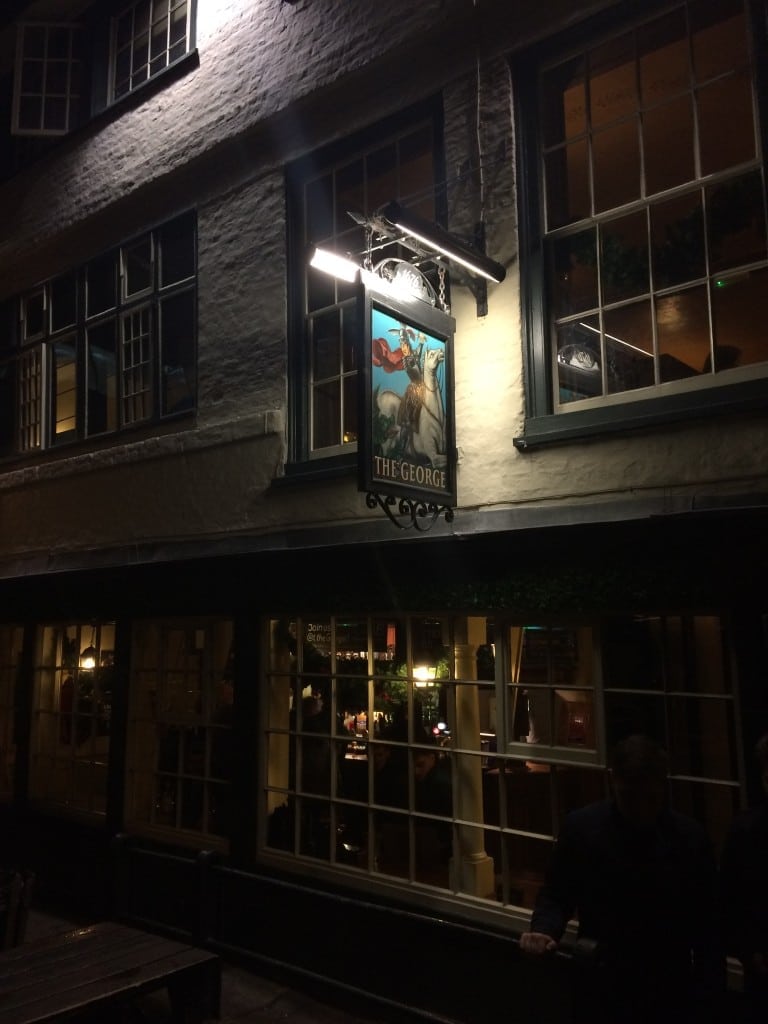 On our final day in London, we said goodbye to my family since they were heading back home to Texas that day. Afterward we walked around Portobello Road Market, grabbed lunch, and hopped on the train to our next destination! 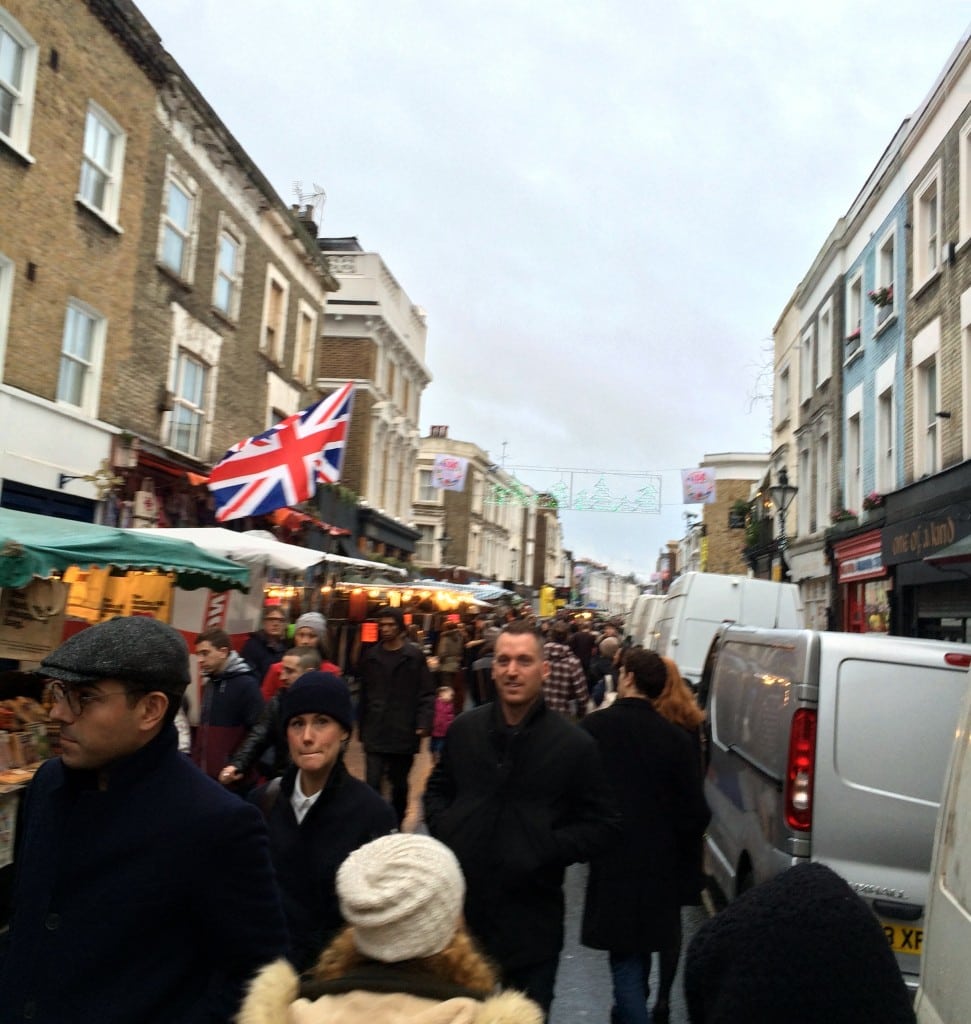 If you are looking for more London travel advice or a re-cap of our previous trip, click here, here, and here.

Our time in London was part of a 2.5 month trip across Western Europe.  Click here to check out all of my posts from this adventure! 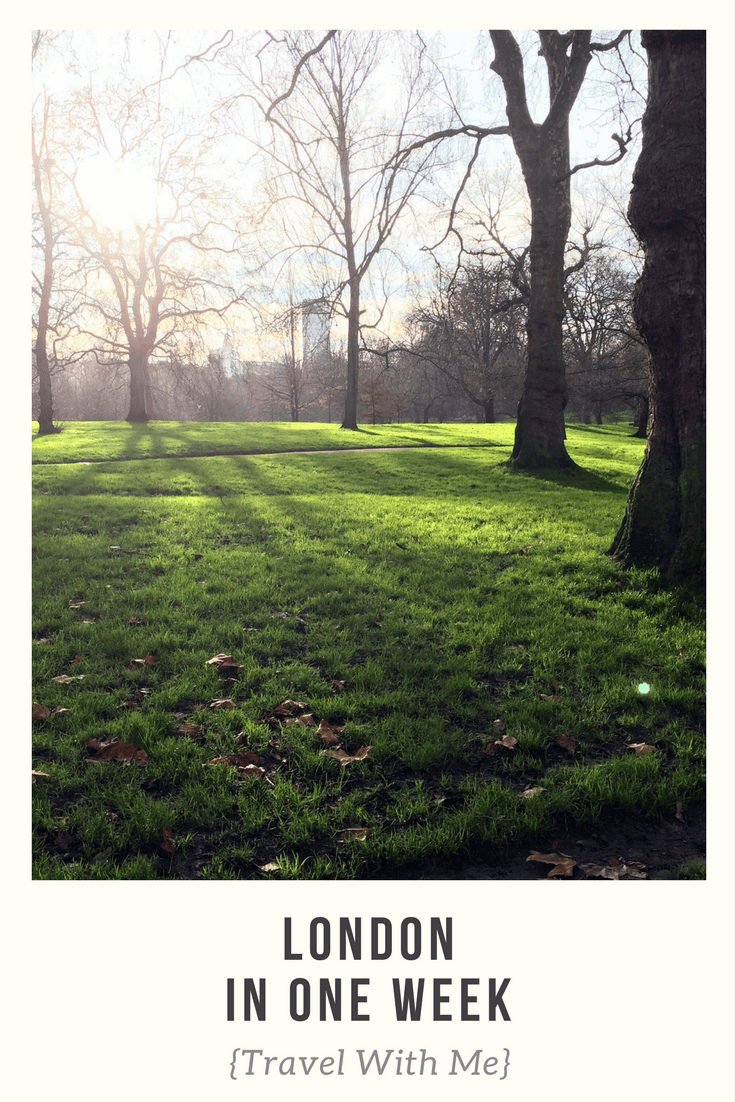